This Is Your Brain on Sports 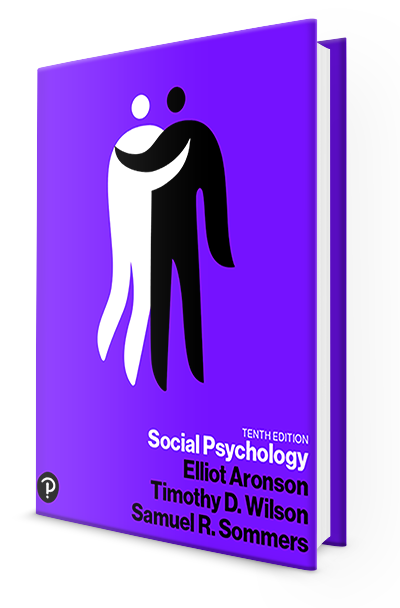 Social Psychology introduces the key concepts of the field through an acclaimed storytelling approach that makes research relevant to students. Drawing upon their extensive experience as researchers and teachers, Elliot Aronson, Tim Wilson, and Sam Sommers present the classic studies that have driven the discipline alongside the cutting-edge research that is the future of social psychology.

Elliot Aronson is Professor Emeritus at the University of California at Santa Cruz and one of the most renowned social psychologists in the world. In 2002, he was chosen as one of the 100 most eminent psychologists of the twentieth century. Dr. Aronson is the only person in the 120-year history of the American Psychological Association to have received all three of its major awards: for distinguished writing, distinguished teaching, and distinguished research. Many other professional societies have honored his research and teaching as well. These include the American Association for the Advancement of Science, which gave him its highest honor, the Distinguished Scientific Research award; the American Council for the Advancement and Support of Education, which named him Professor of the Year of 1989; the Society for the Psychological Study of Social Issues, which awarded him the Gordon Allport prize for his contributions to the reduction of prejudice among racial and ethnic groups; and the William James Award from the Association for Psychological Science. In 1992, he was named a Fellow of the American Academy of Arts and Sciences. A collection of papers and tributes by his former students and colleagues, The Scientist and the Humanist, celebrates his contributions to social psychological theory and its application to real-world problems. Dr. Aronson’s own recent books for general audiences include Mistakes Were Made (but not by ME), with Carol Tavris, and a memoir, Not by Chance Alone: My Life as a Social Psychologist.

Sam Sommers earned his B.A. from Williams College and his Ph.D. from the University of Michigan. Since 2003 he has been a faculty member in the Department of Psychology at Tufts University in Medford, Massachusetts. His research examines issues related to stereotyping, prejudice, and group diversity, with a particular interest in how these processes play out in the legal domain. He has won multiple teaching awards at Tufts, including the Lerman-Neubauer Prize for Outstanding Teaching and Advising and the Gerald R. Gill Professor of the Year Award. He was also inducted into the Tufts Hall of Diversity for his efforts to promote an inclusive climate on campus for all students. He has testified as an expert witness on issues related to racial bias, jury decision-making, and eyewitness memory in criminal trial proceedings in eight states. He has written two general audience books related to social psychology: Situations Matter: Understanding How Context Transforms Your World (2011) and This is Your Brain on Sports: The Science of Underdogs, the Value of Rivalry, and What We Can Learn from the T-shirt Cannon (2016). He is also co-author of Invitation to Psychology (7th edition), along with Carole Wade, Carol Tavris, and Lisa Shin.